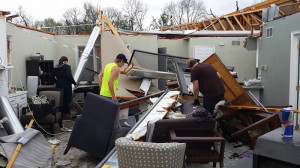 This home in Lake Panorama was damaged by Sunday’s storms.

Damage assessment teams from the National Weather Service are fanning out in several locations across Iowa, surveying the destruction from Sunday night’s severe storms.

The weather system brought winds up to 70 miles an hour, large hail, heavy rain and flash flooding, along with as many as three tornadoes.

Meteorologist Kurt Kotenberg, at the National Weather Service office in Johnston, says one team is heading to Guthrie Center and Lake Panorama, to the west of Des Moines, in Dallas and Guthrie counties.  “We’ve gotten lots of reports and pictures of significant damage, some big trees down,” Kotenberg says. “There’s a 50-foot pine tree which had about a 14-inch diameter that was snapped in half. They’ll go out and look at things like that and try to determine whether the damage was caused by a tornado or straight line winds. They’ll report back to us with that information.” 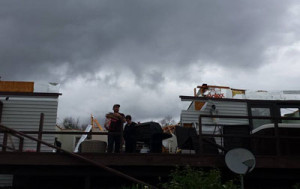 Residents of Lake Panorama are cleaning up after Sunday’s storm.

Possible tornadoes were also reported in Sunday’s storms in northwest Iowa near Akron and Hospers, and in southeast Iowa near Donnellson. One thing that was unusual about this storm was the timing, as severe weather usually strikes during the late afternoon hours. Tornado sirens were blaring in central Iowa around 11 P.M. with this storm.

“We’re always here 24-7-365 and that’s one thing that we really try to do, let people know in advance when we’re going to have severe thunderstorms like this during the nighttime period,” Kotenberg says. “We spent all of yesterday sending out messages to try and make sure you had a way to receive weather information before you head to bed because we knew the storm would be coming through overnight.”

There’s also a threat of severe weather in Iowa this afternoon. “We could see a tornado or two, we could see some large hail, we could see some damaging winds, but the threat isn’t as strong as it was yesterday,” Kotenberg says. “Also, the threat will be mainly during the afternoon and early evening hours here in central Iowa so we will not be contending with storms that will last into the overnight period. They’ll mainly be this afternoon and evening.”

Reports say several homes were heavily damaged in the Panora and Lake Panorama area last night, but no serious injuries are reported.