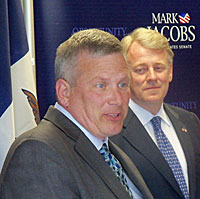 Northey says all five candidates in the race are good, but he decided to make his first ever primary endorsement for Jacobs. “One of the reasons that I am supporting Mark Jacobs is that he is a businessman (who) understands business,” Northey says. “He is a proven business leader that has saved jobs, he has made payroll and understands business in a way that our Iowa businesses can be ensured that they will have a proven business leader in Washington, D.C. representing them.”

Northey is a farmer from Spirit Lake who is running for his third term as ag secretary. He says Iowans don’t get a chance to select a new senator very often and that’s why he decided to make an endorsement. “I get a lot of questions about where is agriculture in this race and where are the folks who stand up the most for agriculture. And decided I needed to step forward and say my point of view was that I think Mark is the best for business and understanding agriculture,” Northey says. 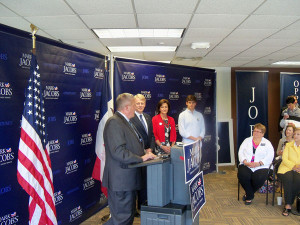 Jacobs says he has the best experience to create new jobs. “As your next United States I will work tirelessly to make jobs for Iowans my number one priority. Whether they be in the agricultural field, the manufacturing field or otherwise — because that’s what we need. We need a United States Senator that understands the core problem in this country,” Jacobs says.

Other endorsements in this race include 2012 Iowa Caucus winner Rick Santorum and former Republican gubernatorial candidate Bob Vander Plaats — who are supporting Sam Clovis — while Joni Ernst has been endorsed by the N.R.A. and the U.S. Chambers of Commerce.

The other Republican Senate candidates are Matt Whittaker and Scott Schaben.