You are here: Home / Fires/Accidents/Disasters / State’s deadliest tornado outbreak May 15, 1968 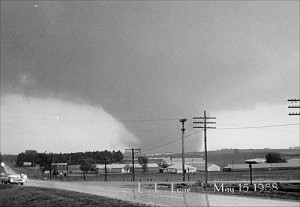 Photo taken by Floyd County Sheriff L.L. Lane. It shows the tornado when it was 2 miles southwest of Charles City.

Iowa’s deadliest tornado outbreak ever occurred on this date back in 1968. The storm claimed the lives of 18 people and injured 619.

Five tornadoes were confirmed across Iowa on May 15, 1968 — including a half-mile wide F5 that tore directly through Charles City in northeast Iowa. Tom Shilling was 10 years old at the time and was delivering newspapers as the tornado grew in size south of town.

Shilling recalls he had the largest paper route in town: “I looked at it and thought, ‘what the heck?’ I looked back at a house and it split right in half,” Shilling recalled. “All of the sudden the rivers started filling up with cars and stuff, so I said ‘the heck with it.’ I threw both paper bags and started running home.”

Shilling made it home safe. Thirteen people were killed in Charles City, while more than 460 were injured. Joyce Cook farmed on the edge of town with her husband and says they were very lucky.  “We could see it from our house, coming right at as,” Cook said. “All of the sudden, the wind switched and it went to the east. The place a mile from us was demolished.”

The tornado destroyed 372 homes, 58 businesses, and 1,250 vehicles. Damage was estimated up to $30 million. The other four tornadoes in Iowa on May 15, 1968 affected the towns of Oelwein, Maynard, Jackson Junction, and Cresco — all in northeast Iowa — and a rural area in western Iowa’s Audubon County. The tornadoes in Charles City and Oelwein were both rated as F5s.

The National Weather Service has more  information about the May 15, 1968 tornadoes.