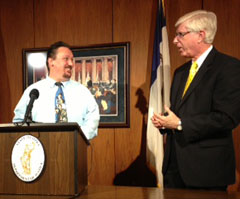 Iowa Attorney General Tom Miller has secured a $7.25 million settlement with an on-line university accused of consumer fraud. Ashford University, the nation’s second-largest on-line college, denies wrongdoing, but has agreed to make some changes in the way it operates. Miller said a three-year investigation raised questions about how Ashford recruited students.

“One of the problems with Ashford and some of the other for-profits is they would sign up people that weren’t really qualified to go to college,” Miller said, “and they would drop out fairly quickly, but they’d borrow some money and be responsible for that money.”

In addition to saddling drop-outs with debt, students like Pat Kean who took Ashford’s online classes to become a teacher say they were misled about their degree.

“At the end they go, ‘Oh, by the way, you have to get your masters degree from another program in order to teach or you can go to another school and do another two-year program,” said Kean. “I tried to go to other schools in the state, but nobody would accept any credits.”

That includes the Ashford campus in Clinton, Iowa, which is run separately from the on-line operation. Kean was part of a “Troops to Teachers” program and he used federal GI Bill money to pay for his Ashford degree.

“I was clearly ripped off, clearly. I don’t think there’s any other way to describe it,” Kean said during a news conference in Miller’s office. “When you come out with nothing but a piece of paper for $30,000, it’s not a good deal.”

Bridgepoint Education in San Diego, California, is the parent company of Ashford University. In 2005, Bridgepoint bought the Franciscan University of the Prairies in Clinton, Iowa, and there are about 800 students attending classes on the Ashford campus in Clinton, but another 64,000 Ashford students are enrolled online.

Miller said his office will contact the estimated 5000 Iowans who took Ashford’s on-line courses and they’ll get money from that seven-million dollar settlement as reimbursement for the tuition and fees they paid to Ashford. As part of the settlement, Miller said Ashford has agreed to quit charging a “technology fee” of up to $1290 that was not refunded if students dropped out. Ashford is, instead, charging a $50-per-course technology fee today.