You are here: Home / News / Mystery solved for 1 of 2 winning Powerball tickets sold in Tipton 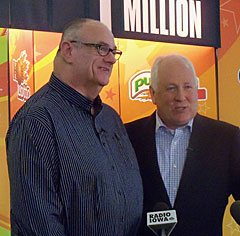 A Missouri man has stepped forward to collect one of two large Powerball prizes from tickets sold in Tipton six months ago that have been unclaimed. Lottery officials have been searching for possible winners and identified 58-year-old Richard Watson of Belton, Missouri as someone who may’ve purchased a ticket worth one million dollars.

Watson visited Iowa Lottery headquarters today and says he was just about to check out several tickets he had purchased. “I noticed that I had four Iowa Lottery tickets that expired, and that’s what prompted me to go through and collect all my tickets together,” Watson says. “So, I put them all together and put them in my little plastic bag and then put it in my computer bag, so I had it with me.”

Watson called the Iowa Lottery and checked his numbers to confirm he had won. He lives with his parents who are in their 80’s and says he got a another surprise when he called them. Watson says his dad told him that his mom had a dream the night before where she dreamt that he had won a million dollars. “I said, oh wow, guess what I did,” Watson laughed.

Watson plans to buy a new home where he can take care of his parents. “Their health is holding up, but they’re in their 80’s. It’ll be nice to spent what little time we have left together together. So this money will allow us to move back to Vegas where we are originally from — get a nice place,” Watson says. Watson will take home $700,000 after taxes.

Tickets expire in Iowa 365 days after the drawing. Watson says he checked, but does not have the other unclaimed ticket sold in Tipton that is worth $10,000.