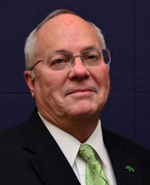 The mayor of a fast-growing Iowa City suburb died unexpectedly Sunday. North Liberty mayor Tom Salm died of a heart attack. He was 61. Mayor Pro Tem Gerry Kuhl says, like many others, he was shocked to hear the news. “Tom told me on Tuesday after our council meeting that he was in great health. He just had a bunch of tests done,” Kuhl said. “I agreed with him. He looked good.”

Kuhl described Salm as a happy, open-minded person who had the city on a course of progress. “He was a forward looking person and he certainly had the needs of this community in mind. It was always his primary concern,” Kuhl said. City Administrator Ryan Heiar said he started working with the mayor in 2007.

He said Tom was his mentor. “I was still fairly young. I was 29 when I came here and he just was always there to be supportive,” Heiar said. Voters re-elected Salm in November with 82% of the vote. He was first elected mayor in April 2007 after the city council appointed him to fill a vacancy until the November election. He was elected in the fall and in 2009, in addition to last year.

Kuhl, who was also re-elected in November, will serve as mayor until the city council decides how to fill the position. Possible options include a short-term appointment or special election. In addition to his time as mayor, Salm worked as a project manager for Terracon, an engineering firm. He started with the company in 1970 and focused on geotechnical and environmental projects, according to his LinkedIn profile.