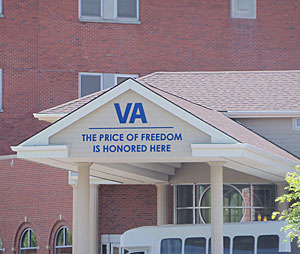 Two Iowa Congressmen visited the Veterans Administration hospital in Des Moines today  as the controversy surrounding long waits and the death of veterans at federal hospitals in other states continues.

Congressman Tom Latham, a Republican from Clive, toured the facility and says it does not have the major problems seen in other states. “While sometimes access initially getting into the system can be difficult and delayed, once they get into the system, they are very, very pleased,” Latham says.

Democrat Dave Loebsack of Iowa City accompanied Latham on the tour. Loebsack says he’s been to  the VA hospital in Iowa City in his district, but has never toured the hospital in Des Moines, and wanted to see how it operated. “It’s really a good thing to do I think on a bipartisan basis. The other thing is we’ve got to keep the resources coming to these facilities, I think we can all agree about that,” Loebsack says. “Since I’ve been in office there has been bipartisan support to continue to increase the resources to the extent which we can for these kinds of facilities for out veterans in general,” Loebsack says.

Loebsack also has a special interest as his stepson and wife are both in the Marines. “There is a personal aspect to it, I can’t deny that. I want to make sure that those folks who served our country — including my children — get the service and have the facilities, as I said, what they deserve,” Loebsack says.

Latham says the problem with long waits that has led to the deaths of some veterans is systemic. “You have, I think, perverted incentives to move cases. They get bonuses in the system if they handle so many cases trying to push them through. They find any technicality to reject applications,” Latham explains. He says there’s also an ongoing problem with getting information from the Department of Defense on veterans — something Latham says billions of dollars has been spent on with no solution.

Latham says the cooking of the books by some facilities to cover up the problem is not acceptable. “There’s never any excuse for anybody to have a secret waiting list or something like that. It’s an absolute outrage on a bipartisan basis,” Latham says. “Somebody should go to jail as far as I am concerned if that’s the case.” Loebsack agrees. “I think Tom’s right it is systemic, it’s something that’s been going on for a lot of years as far as the wait lists are concerned. And we’ve again, on a bipartisan basis — Congress and President Bush and President Obama — we’ve put more resources in to try and hire more folks to take care of those long wait lists. But it really does take a lot of resources — there’s no question about that,” Loebsack says.

Some are calling for the firing of the leader of the VA, but Latham doesn’t agree. “I don’t know if that’s going to change anything. I mean if you want to have some kind of trophy, I guess that sounds good but I don’t think it changes anything internally,” Latham says. “It’s a systemic problem. I think that there’a an accountability issue.”

Loebsack says if any wrongdoing is found there needs to be punishment. “I think if there is any silver lining to this, it is that we’re refocusing our attention on our veterans and what our veterans have done for us and for our country,” Loebsack says. Latham says there is “a bureaucratic mess going on” in the system, and so far they have not been able to overcome it.