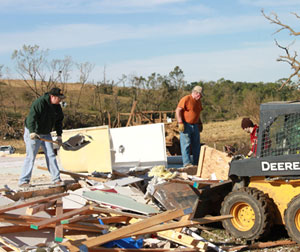 GCN volunteers clean up the home of Marie Benedix, near Correctionville.

Around a dozen volunteers have returned to a farm in northwest Iowa that was wiped-out seven month ago by a tornado. Marie Benedix, who lives on the farm near Correctionville, was not injured in the October 4th tornado. She was in town at a restaurant at the time.

Dennis Anderson is with the Eagle Grove-based Global Compassion Network (GCN), which sent volunteers to Correctionville to cleanup Marie’s property.

“The only thing she salvaged was the basement of her house,” Anderson says. “She’s going to rebuild on top of that, but everything else – a barn, four or five outbuildings, trees, and a smaller house – was completely destroyed.”

The volunteer crew spent five days at the farm cleaning up debris last fall. They’ve returned this week with some heavy equipment to do more work. “We’re taking out all the concrete. On the farm, there was concrete under all the buildings and concrete pads for livestock,” Anderson says. “The rest of the trees are coming down because they were heavily damaged.”

Anderson says some of the land will be returned to crop production and the wood from the trees will be sold to give Benedix some added income. The Global Compassion Network volunteers plan to visit another tornado-damaged farm in the area over the holiday weekend. 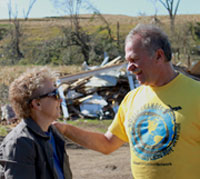 Anderson says Iowans can the effort help by donating cash. “We’ve been very blessed, a lot of the equipment that we’re using is loaned to us. But, we do have some of our own equipment, fuel costs, we have to pay insurance costs…this is very expensive for us to do,” Anderson says. Individuals or organizations interested in contributing may do so online at www.globalcn.us.

Anderson say GCN is focused on helping victims of disasters – primarily the elderly and others without the resources or physical ability to respond on their own. Since the EF4 tornado hit the Correctionville area last October, Benedix has been staying at a temporary residence in town. She plans to return to her farm later this year.

Work on the rebuilding of her home is scheduled to begin this summer.