You are here: Home / Human Interest / Events scheduled across the state for Memorial Day 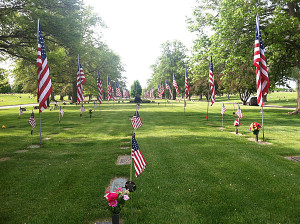 Flags are in place in cemeteries across Iowa as part of Memorial Day events.

A variety of events are scheduled throughout the state in remembrance for this Memorial Day.

Iowa Department of Veterans Affairs executive director, Robert King, says the official state events begin at the Iowa Veterans Cemetery near Van Meter. He says there will be a service there on at 8 a.m. on Memorial Day with Brigadier General Jennifer Walter, Chief of Staff of the Iowa Air National Guard as the guest speaker.

There is then a ceremony at the Veterans Memorial downtown at 11 a.m. with Kevin Heer the Vice-Commander 132nd Fighter Wing will be the speaker.

The Iowa Goldstar Museum at Camp Dodge also has special events happening on Monday. “They serve SOS (stuff on a shingle) breakfast to those who show up for it,” King says. He says there will be a flyover by a World War Two airplane, and King says it’s a great opportunity for families to see the museum.

The ceremony at the Oakwood Cemetery in Pella will have a special performance. “A large portion of that is being done by Civil War reenactors from the honor guard of the Department of the Iowa 49th Veteran Volunteer Infantry. It’s a reenactment group that does a really, really fine job,” King says.

Another event is scheduled for northeast Iowa. King says there’s an event at 10 o’clock at the Rose Hill Cemetery and all Vietnam veterans will receive a pin in commemoration of the 50th anniversary of the Vietnam War. Fredericksburg’s four remaining World War II veterans will also be honored.