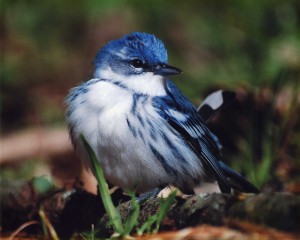 An area in far northeast Iowa is getting international attention thanks to a rare bird species that’s thriving there. The Effigy Mounds-Yellow River Forest Bird Conservation Area is being designated as the state’s first “Globally Important Bird Area.”

Bruce Ehresman, a Wildlife Diversity Biologist with the Iowa Department of Natural Resources, says the designation is being made because of the large cerulean warbler population in the forest. “The bird’s population has been declining by at least 70-percent since 1966 and we know that we have at least 191 pairs up in northeastern Iowa,” Ehresman said.

The Effigy Mounds-Yellow River Forest Bird Conservation Area, which covers 135,000 acres along the Mississippi River, will receive the designation May 31.

The cerulean warbler is a small bird that winters in eastern Peru and southern Venezuela. “Cerulean is a type of blue, so it’s a pretty magnificent blue if you get to see it in the sunlight,” Ehresman said. “The birds are typically way high up in the tree tops. Their nests are often 60 to 65 feet off the ground, kind of on the outer branches of the tree. So, their nests aren’t easily found. But, they’re certainly finding this particular habitat in northeast Iowa to their liking.”

A dedication event is scheduled for 11 a.m. on May 31 at the Yellow River State Forest headquarters, located along Allamakee County Highway B25 southwest of Harper’s Ferry. The Globally Important Bird Area program is conducted worldwide by BirdLife International, based in Great Britain, and the National Audubon Society.