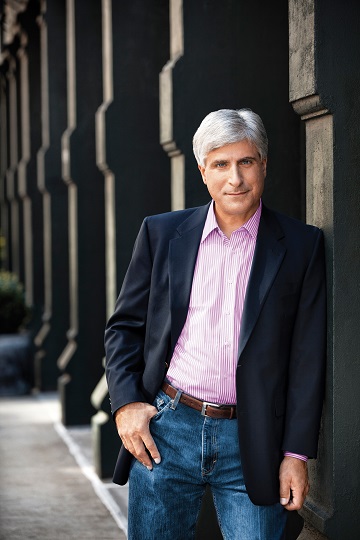 An author who’s had eight best-sellers says one of Iowa’s most historic homes is featured prominently in his latest novel and he’ll be visiting the state for a historic preservation fundraiser this coming weekend.

Steve Berry’s new book, “The Lincoln Myth,” is set both in modern day and flashes back to the Civil War era when Abraham Lincoln was our 16th president.

“Lincoln is one of those guys that the truth has really been completely overshadowed by the myths,” Berry says. “We’re going to explore some of these in the novel. It deals with a very interesting constitutional issue of secession and it involves my recurring character Cotton Malone who’s back for a 10th adventure and he gets himself caught up in this constitutional debate.”

There’s been a great resurgence in interest about Lincoln in recent years, even a horror movie depicting the president as a vampire hunter. Berry says he spent 18 months researching Lincoln’s history to include plenty of facts in this latest work of fiction.

“He’s a fascinating character and he had a tough job, there’s no question he had a tough job,” Berry says. “He made some very interesting decisions, in fact, the whole concept that our union is indivisible, it cannot be broken and no state can leave and we’re here forever came from Abraham Lincoln.”

Iowans will recognize one of the settings in Berry’s new novel, a stunning mansion that was built in the 1920s by Iowa’s first millionaire.

“There’s an Iowa tie in this book very strongly, at about half way through,” Berry says. “It came when I was there a few years ago. I was in Des Moines and they took me out to Salisbury House. I went out there and it was a really cool place and so there’s a whole set of scenes in this novel that take place at Salisbury House.”

Berry and his wife created a non-profit group several years ago called History Matters, which raises money for historic preservation. He’ll be in Davenport on Sunday at 6:15 P-M for an event to benefit the city’s Art Legacy League.

“We’re going to do a meet-and-greet, a talk and answer questions and see everybody,” Berry says. “All the money raised that night’s going to go to the projects that the Art Legacy League sponsors. We’ve done these all over the country. We’ve raised three-quarters of a million dollars for various historic projects and we’re looking forward to coming out and doing one there.”

His books have been translated into 40 languages with more than 15-million printed copies in 51 countries. Learn more at www.steveberry.org.