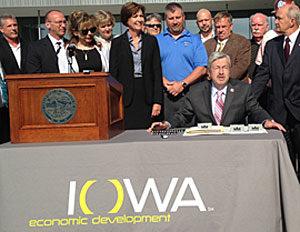 Governor Terry Branstad went to a central Iowa construction site today to sign a bill into law which will expand apprenticeship opportunities in Iowa.

“Apprenticeships allow students to earn while they learn rather than taking on significant student debt,” Branstad said. “They provide…focused, hands-on training and a paycheck from day one.”

Branstad’s staff staged the bill signing ceremony in the parking lot of a Facebook data center which is under construction in Altoona.

“As we speak, apprentices are inside working diligently to prepare this facility to be operational in the near future,” Branstad said.

The Iowa Apprenticeship and Job Training Act triples the state funding for apprenticeship programs. Lieutenant Governor Kim Reynolds said there are more than a thousand registered apprenticeships in the United States today.

“Apprenticeships allow us to address the skilled worker gap, to ensure that Iowa can continue to be the choice for these job creation projects,” Durham said.

The bill Branstad signed into law today provides $2.7 million to apprenticeship programs and Durham’s agency will work with the state’s community colleges to decide how that money is distributed.

“Providing workers with the kind of training they need to be successful in the jobs Iowa employers are creating is essential to keeping our economy working,” Durham said. “No one disputes that fact that apprenticeship programs are a proven form of training that leads to higher wages for workers and specially trained employees for Iowa employers. That’s why today is such a great day.”

Durham said state officials hope to mimic the success the country of Germany has had with its programs for apprentices. Many high school students in Germany enter apprenticeship programs before they graduate, and Germany currently has a nine percent unemployment rate among its teenagers. The U.S. unemployment rate among teens who want to work is more than 20 percent.