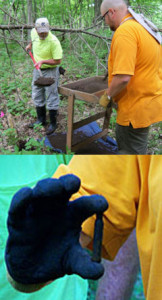 Owen Reese and Pat Hashman look for artifacts. They found a bullet casing from World War I.

Historians and leaders of the Iowa National Guard are excited about the discovery of a World War One trench training area recently uncovered using special aerial photographs.

Iowa National Guard spokesman, Colonel Greg Hapgood, says it’s important that the site has been found 100 years after the war. “It’s a piece of priceless history that can’t be replaced if it were to ever go away,” Hapgood says. “The timeliness of actually finding this site is huge. That it can be preserved and be guarded for future generations to understand the history of what our nation went through in World War One.”

Hapgood says the area got lost for many years as the government quickly downsized the base following the war.

“There’s two comparison photos at the museum that show Camp Dodge at its Hey Day and either a year or two later what it looked like. They sold off all the lumber, they tore down all the buildings. You have this huge city, and then nothing after a couple of years,” Hapgood says. “So, it’s pretty amazing how the government wanted to get as much as it could out of Camp Dodge after it was finished.”

The area is north of the current base along an abandoned rail line and was used for training later, but not at the level of World War One. By the 1930’s it had grown over with trees and eventually became a restricted area at the edge of the firing range. 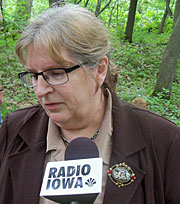 Mary Jones, an environmental specialist with the Iowa National Guard, says the heavy tree and vegetation growth makes this an interesting dig. “It is unusual in that usually they have a field to survey, and they have to lay gridwork, they have no idea where things are. In this case we’ve got the advantage — we’ve already got the framework — and basically what they need to do is go in and see what type of artifacts are here,” Jones says.

They’ve been using metal detectors and have uncovered a variety of artifacts such as training grenades and several types of ammunition shells. Jones says the initial phase is to identify the area so it can be preserved. They will seek to have it place on the National Register of Historic Places, something she believes that designation will happen. Jones says it’s “very likely” they will get the designation, and if they don’t they will still treat the area with the respect it deserves.

She says Iowa Guard has budgeted $10,000 to identify the site in the first stage. Jones says they will seek more funding to help continue the effort to preserve the site.