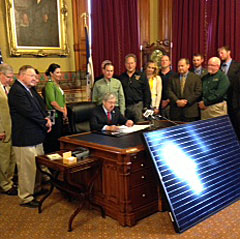 Governor Terry Branstad has approved a bill that will get two Iowa casinos out of the greyhound racing business. The Bluffs Run track in Council Bluffs will close on December 31, 2015.

Racing at the Dubuque Greyhound Park will continue, but management of the track will shift from the Mystique Casino to the Iowa Greyhound Association.

The bill was the result of hours of negotiations between the casinos on one side and the greyhound industry on the other.

“I think a lot of people were surprised that it did come together. There was some disappointment from the horse industry that they really weren’t included in a lot of the discussions on this,” Branstad said earlier today. “…The communities in both Council Bluffs and Dubuque have a real interest in this and the non-profits.”

The two casinos complained they were subsidizing a dying dog racing industry to the tune of $13 million a year, money that otherwise could have been distributed to local charities.

Governor Branstad had until midnight Saturday to take action on all the bills the 2014 Iowa legislature passed, but his staff announced shortly before 6:30 this evening that the governor had completed his work. Branstad vetoed a bill that called for paying off $80 million worth of state debts and spending another $60 million on a variety of other projects. Branstad said it put his budget plan out of kilter, dipping in unspent money Branstad intends to use to pay local governments to cover reduced commercial property tax rates.

Branstad held a series of public bill-signing ceremonies this afternoon. A large group gathered around Branstad’s desk as he signed a bill that dramatically changes the current penalties for those found guilty of transmitting HIV, the virus that causes AIDS. A state law passed in the 1990s set a 25-year prison term for those infected with the virus who could not prove they disclosed their status to a sexual partner, even if they took precautions during sex and AIDS was not transmitted.

Tammy Haught of Nashua, president of a group called PITCH — Positive Iowans Taking Charge, was diagnosed with HIV in 1993. She was on hand for the bill signing ceremony.

“This is an incredible moment for Iowans living with HIV,” Haught said afterwards. “…Seeing the governor sign this bill that we’ve worked so hard for the past five years is tremendous.”

The new law, which goes into effect July 1, preserves the 25 year prison sentence for the most egregious case of intentional transmission of HIV. The governor notes the new law also will allow prosecutors to file charges against people who intentionally try to transmit contagious diseases like Hepatitis C and tuberculosis to others.

“The simple truth is this bill is better public health policy, while it’s still tough on crime, so I think it’s got a good balance,” Branstad said.

Branstad also held a signing ceremony for a bill that expands the state tax credit for solar energy. Bill backers brought a solar panel into the governor’s office for the event.

“It’s a little tough with the roof on this building,” Branstad said, laughing, as the flat panel likely wouldn’t fit on any of the domes on top of the state capitol.

Another bill Branstad approved sets January of 2017 as the new deadline for small wind energy developments to sign up for state tax credits.

“It also has a technical change which will help a co-generation facility in Mason City,” Branstad said to a crowd gathered in his formal office in the capitol. “I think you all know I’ve been a long advocate for wind energy in Iowa and I’m proud that we’ve been able to see significant bipartisan support among our legislators and also in our congressional delegation on the wind energy issues.”

A large crowd gathered in the state capitol’s rotunda to watch Branstad sign the bill which decriminalizes possession of cannabis oil in Iowa for patients with chronic epilepsy.