You are here: Home / News / Romney rallies with Ernst in Cedar Rapids (AUDIO) 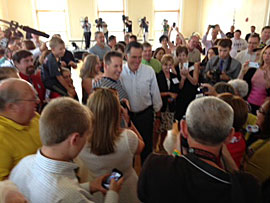 Mitt Romney, the 2012 Republican presidential nominee, is campaigning today with Joni Ernst, one of five G-O-P candidates for the Iowa GOP’s 2014 U.S. Senate nomination. Romney’s rallied early this morning in Cedar Rapids with Ernst and a crowd of about 60.

“You know it’s important because the road to real change and a Republican senate and getting Harry Reid out of that chair he sits in, that road goes through Iowa and at the head of that road is Joni Ernst,” Romney said, to cheers.

It marked Romney’s first trip back to Iowa since the 2012 campaign. Romney told reporters Ernst asked him to campaign with her and he decided his appearances in Cedar Rapids and Davenport might help sway a few votes in a close contest.

“It’s frankly fun to be back in Iowa and see old friends here. We have a lot of old friends in Iowa and this part of the state was particularly supportive of me in my primary campaigns and I have warm feelings for not just the river, but the people,” Romney told reporters this morning in Cedar Rapids. 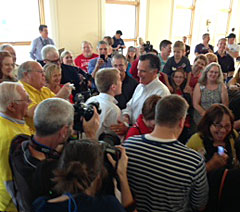 Mitt Romney talks with a supporter during a rally for Joni Ernst in Cedar Rapids.

Ernst, who spoke at the rally right after Romney, did not mention her primary opponents and, instead, focused on Bruce Braley, the only Democrat running for Iowa’s U.S. Senate seat.

“Bruce Braley’s way, the Washington way, it’s not working,” Ernst said. “But let me tell you, what — our way, the Iowa way is working. It is working!”

Both Ernst and Romney highlighted the campaign ad touting Ernst’s background as a pig-castrating farm girl that sparked the rise Ernst has made in the race. Romney called Ernst a “real Iowan” who did “squealing work” on the farm.