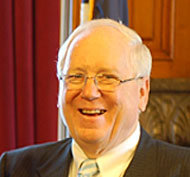 The state’s highest citizen honor, The Iowa Award, will be presented this afternoon to the chairman of the World Food Prize. Kenneth Quinn will be handed the award that was established in 1948 and has been given to prominent Iowans such as President Herbert Hoover, physicist and space researcher James Van Allen, and composer and musician Meredith Willson.

“To even, for a moment, think that I might somehow be thought of with that group of people…I mean, there is no greater moment in my professional career and there’s no greater honor I could ever have,” Quinn said during a recent appearance on the Iowa Public Television program Iowa Press.

Quinn will become just the 23rd recipient of the award, which is usually handed out every 4 or 5 years. At the age of 10, Quinn moved with his family from New York to Dubuque. He graduated from Wahlert High School and Loras College. Quinn retired from the State Department after a 32 year career in the Foreign Service and said he always took great pride in his Iowa roots. “When I was the U.S. Ambassador in Cambodia, I brought art with me from Iowa to put in my residence and always remembered where I was from,” Quinn said.

Following his retirement in 2000, Quinn joined the World Food Prize Foundation and now serves as the organization’s president. The World Food Prize, based in Des Moines, was founded in 1987 by crop geneticist and Nobel Peace Prize winner Norman Borlaug.

The $250,000 World Food Prize, often referred to as the “Nobel Prize for Food and Agriculture,” is awarded annually to individuals who have helped improve the quality, quantity, or availability of food around the world. Borlaug, a Cresco native, received The Iowa Award in 1978.

Governor Terry Branstad will present The Iowa Award to Quinn at a ceremony scheduled for 4 p.m. today at the World Food Prize Hall of Laureates in Des Moines.