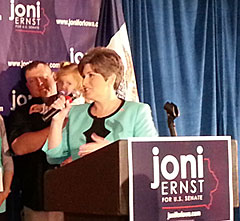 Joni Ernst has secured the Iowa Republican Party’s nomination for the U.S. Senate.

Ernst, a state senator who is also a commander in the Iowa National Guard, hugged her family as each member of the Ernst clan came on stage, then she spoke to supporters.

“We have one common goal and that is to defeat Bruce Braley,” Ernst said.

“I appreciate not only their hard work and their interest in this race, but also their supporters, so what I’d like to do is work really hard to gain the trust and the support of all of their supporters also because it is going to take all of us pulling together unite this party to win in November,” she said, to cheers.

Ernst finished with 56 percent of the primary vote.

Clovis, a Morningside College economics professor who was making his first run for political office, finished second, with 18 percent of the vote.

“We had a fantastic run,” Clovis said during an interview at his campaign headquarters in Sioux City. “We did really good. I think nobody gave us a chance to come even close.”

Clovis, who lives in Hinton, carried his home county of Woodbury along with other conservative western Iowa counties, where he had name recognition as a radio talk show host.  Clovis said his campaign gave a voice to the conservative movement in the state.

“Me running in the race moved everybody to the right and made them crystalized their positions and stand up for conservative principles which is as Republican as Republican can be,” Clovis said. “I think that’ll be enough to beat Braley in the fall and I hope Senator Ernst has a great run.”

Jacobs, the former CEO of a Texas energy company who spent over $1.5 million of his own money on the race, finished third, with just under 17 percent of the vote. 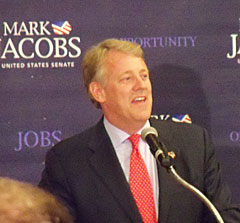 Ernst a few minutes ago and congratulate her on her win and I pledged to her my 100 percent support.”

Bruce Braley, the Democratic congressman who formally secured his party’s nomination this evening, spoke with Radio Iowa before the GOP race had been called.

“No matter who my Republican opponent ends up being, I know that there will be a clear choice in this race between my proven record of bringing people together to deliver results for Iowa and fighting for working families and my opponents’ right-wing obstructionist views that put them out of step with Iowa and hurt working families,” Braley said.

Whitaker, a former federal prosecutor from Clive, told Radio Iowa late this evening that he’ll do what he can to help Ernst win in November.

“I accept that the Iowa voters didn’t want what I was offering in this election,” Whitaker said. “…I’ll be a proud Republican and continue to fight hard for candidates I believe in.”