You are here: Home / Fires/Accidents/Disasters / Storm clean up underway in parts of Iowa 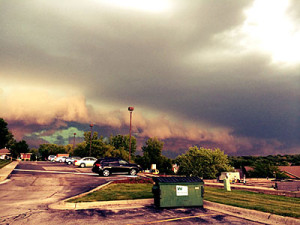 Chainsaws are buzzing across southwest and south-central Iowa as residents cut apart some of the hundreds of trees that fell in Tuesday’s severe storms. Some areas report wind gusts of 80 to 90 miles an hour along with heavy rain, flash flooding and large hail.

Tornado sirens sounded in several counties last night and at least one twister reportedly touched down about 5:15 near Oakland. Longtime school administrator Jan Harris lives near Oakland and described the moment the storm hit his home.

“During the hail, thank goodness we were all down in the basement when this happened and we came upstairs and an evergreen tree that’s probably between 35 and 40 feet tall and stood in front of our house was totally uprooted,” Harris says. “It wasn’t even splintered. It was completely uprooted completely in one piece and laid across the driveway.”

Joyce Isaacson lives in the small town of Wheeler Grove, between Carson and Griswold. Isaacson says a house of worship in town took some heavy hits. “There’s a country church out here and they have tons of great big cedar trees and at least six of those trees that are really huge have toppled over,” Isaacson says, along with a shed and an air conditioning unit that were flipped over. She says there’s plenty of damage in Wheeler Grove. “Some neighbors had a grain bin go down and a big camper is flipped upsidedown and a shed was destroyed,” Isaacson says. “We drove around the square and there’s trees down everywhere.” 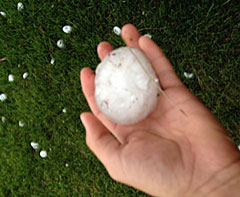 Late Tuesday, Governor Branstad issued a proclamation of disaster for Pottawattamie County as a result of storm damage. The declaration allows the county to utilize state resources to respond to and recover from the storm’s impact. Donnie Willet, the emergency management coordinator for Adams County, says damage spans the entire county.

Brian Hamman, Montgomery County’s emergency management coordinator, says the wicked winds caused extensive tree damage. “We have reports of trees on houses in Emerson and Hastings and numerous trees across roads and blockages,” Hamman says. “Also, north in the county, at Brothers and 380th Street, we had water crossing the road, just a deluge of water which made it very dangerous for people on that roadway.”

Flooded roads were also a big concern in Montgomery and Mills counties. Heavy wind damage is reported in Ringgold and Taylor counties. In Fremont County, a semi was reportedly blown off Interstate 29 near the Hamburg exit. In Page County, heavy rain was the main problem. Street flooding was extensive in Shenandoah. Severe storm damage was reported in Atchison County, where power outages were reported in Fairfax, Tarkio and Westboro.