You are here: Home / News / Braley criticized for “chick” imagery in ad against Ernst 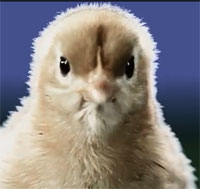 The ad features a baby chick. A spokeswoman for the National Republican Senatorial Committee says if it was a male Republican candidate comparing a Democratic female to a chick, there would be “outraged” reaction from Democrats demanding that the ad “be condemned” and pulled.

“I think the voice over says Joni Ernst didn’t say a peep and then they show the chick and my first thought because I’m at this point kind of attuned to these sorts of things was, ‘Whoa, referring to a female opponent as a chick could be a problem,'” Hagle says. “And certainly if it was a Republican doing this to a Democratic opponent it would be.”

Hagle says it’s “fairly obvious” Braley has to be careful in how his campaign addresses his female opponent.

“As we’ve seen regularly in the past, male candidates will often say things that seem in the eyes of some, at least, to denigrate their female opponents and at this point candidates, regardless of party, should be well aware of those kinds of problems and work to sidestep them,” Hagle says.

The spokeswoman for the National Republican Senatorial Committee says Democrats who’ve attacked Republicans with “claims of misogyny” are “of course” remaining silent when the shoe is on the other foot.  Hagle is surprised the Braley campaign is sticking with its “chick”-themed attack.

“In this case you’re attacking, seemingly disparaging a person based on gender, then it can become more of an issue,” Hagle says. “Now the question is: Will people be upset about that? Some people are. Some people aren’t and, at least right now looking at my Twitter feed, it seems to be falling along political lines more than anything else.”

The ad argues Ernst doesn’t have a record of cutting pork in the state legislature.

“The substance of our ad shows just how clearly her record does not live up to the image she’s portraying on TV,” says Sarah Benzing, Braley’s campaign manager.

The Ernst campaign points to three pieces of legislation Ernst co-sponsored that would have cut into the state government’s budget. One called for a freeze on state employee pay.

The Iowa Democratic Party has embraced the Braley ad and scheduled a series of news conferences around the state today to push the “not a peep” message against Ernst.

(This story was updated at 2:43 p.m. with the response from the Ernst campaign.)