You are here: Home / News / Democrats go on “peep” offensive against Ernst 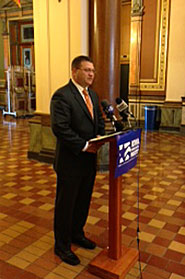 Four Democrats from the state legislature are staging a series of news conferences around the state today to criticize a Republican colleague who is now the Iowa GOP’s nominee for the U.S. Senate.

Steve Sodders, a Democrat from State Center who is a member of the Iowa Senate, said fellow senator Joni Ernst — the Republican candidate for the U.S. Senate — doesn’t have a record of cutting pork in the state budget.

“She’s had many times as a senator to put in bills or amendments to cut any kind of spending and I haven’t seen it,” Sodders said. “It hasn’t been there.”

Sodders, as you’d expect, is supporting Democrat Bruce Braley in the U.S. Senate race. Braley is running a campaign ad, questioning Ernst’s pork-cutting credentials., arguing when Ernst had a chance to cut pork in the state budget Iowans “didn’t hear a peep.”

Sodders ridiculed Ernst’s campaign ads which have featured Ernst riding a motorcycle and Ernst talking about growing up on a farm and castrating pigs.

“Iowans aren’t for mutilating animals and riding Harleys to Washington, D.C. You’ve got to have more substance than that if to be a United States Senator and she, in my view, has not talked about what she wants to do, what she wants to cut,” Sodders said. “Iowans don’t know her.”

The Ernst campaign has not yet responded to the attack.