Magnet being installed at the University of Iowa.

A massive magnet was installed at the University of Iowa today. The MRI scanner weighs 42 tons and will be used for brain research. 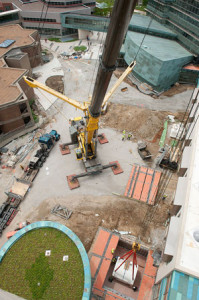 Crane lifting the magnet in place.

Doctor Peg Nopoulos, a U-I researcher in neurology, pediatrics, and psychiatry, says while the magnet is big in size, it’s even bigger in strength.

“What that means is it’s at a level that’s called 7 Tesla and most MRI machines are at a strength level of 3 Tesla,” Nopoulos says.

The giant magnet was lifted by a crane and placed in the new Pappajohn Biomedical Discovery Building this morning. Nopoulos says it will allow researchers to capture clearer, higher-resolution images of the brain.

The U-I purchased the scanner after winning an $8 million federal grant from the National Institutes of Health.

“I believe this is one of only 50 in the entire world,” Nopoulos said of the instrument. “In the United States in particular, it is a very rare magnet size.”

Photos courtesy of the University of Iowa.