You are here: Home / News / Branstad not publicly picking a candidate in third district race 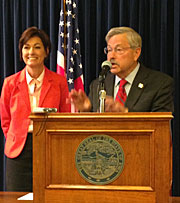 Iowa’s Republican governor plans to stay neutral in the contest among the candidates vying for the slot as the GOP’s nominee in Iowa’s third congressional district. The six-person race wasn’t decided on Primary Night, because a candidate did not get the required support of at least 35 percent of voters.

“We have five very strong candidates that all came very close to each other, I think between 23 and 16 percent,” Governor Terry Branstad says. “I think they’re all working very hard and I intend to remain neutral in the nominating process.”

The candidate chosen to run on November’s ballot will face Democrat Staci Appel of Ackworth. Branstad’s promising to campaign with whomever will face Appel, a one term state senator.

“The Democratic candidate was part of the problem in the senate. She was there with (former Iowa Governor Chet) Culver and also she’s been one of the most vicious, negative campaigners,” Branstad told reporters during his weekly news conference.

Branstad, who is a lawyer, criticizes Appel for using the word “shark” to refer to her 2006 Republican opponent, who was a lawyer.

The Republican Party of Iowa announced Saturday they’ve moved to location of the third congressional district special nominating convention to Urbandale. It will be held at the Des Moines Christian School on Saturday, June 21.