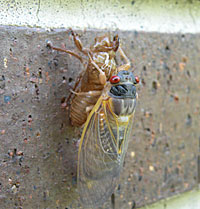 Cicada emerging from its nymph shell.

An insect that’s been living beneath the earth for 17 years has started to move above ground in parts of Iowa. The migration of periodical cicadas is expected to pick up speed any day now. The red-eyed cicadas, most common in woodlands of southeastern Iowa, are the longest living insect in North America.

Millions of the singing cicadas will be appearing soon and Iowa State University Entomologist Ken Holscher says, as a group, they make quite a racket. “When they make that noise, and it’s only the males that make that sound – females can’t make that buzzing sound, it’s just simply a mating call,” Holscher says. After emerging from the ground, the cicadas shed their larvae shells, sprout wings and sing for a mate.

The females, using their wings, create more of a “click” sound with their call. After mating, the insects die. The eggs left behind by the females will result in new cicadas with a 17-year life cycle. Why 17 years? Holscher says it’s believed to be the insects’ way of fighting off the enemy — birds and rodents.

“By emerging in the millions and millions, the vast majority are going to survive long enough to mate and for eggs to be laid to start the next 17-year period,” Holscher says. “So, it’s just kind of overwhelming any predators that are going to be out there that might decimate the population. They’re not going to make a dent in it.”

Periodical cicadas do not have chewing mouth parts and feed only on sap. They will not bite or sting. Holscher is encouraging Iowans to get out and enjoy the bugs, as they won’t be back until 2031. “I know for some folks they’re going to think this is really neat for about a day or two and then they’re going to think, ‘okay, it’s time for them to go away,'” Holscher said. “It’s going to be very, very loud and there’s going to be an awful lot of them out there. I’m sure a lot of folks don’t have the same fond appreciation for insects that maybe (entomologists) do…in terms of the numbers we’re going to see.”

Much like the annual cicadas, Holscher says adult males will “sing” from late morning through early afternoon for five to six weeks after hatching.