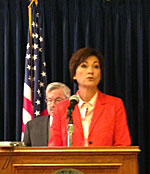 Iowa’s lieutenant governor may have dropped a big hint that she’s planning to run for governor in 2018. Lieutenant Governor Kim Reynolds signed on as Terry Branstad’s running mate in 2010 and the two are running as a team again this year.

During a statehouse news conference this morning, Branstad and Reynolds were asked if they — like U.S. Senate candidate Joni Ernst — have castrated livestock. “I have not, but after seeing the recognition and name-I.D. that you can get, I’ve said I might have to think about it in the next four years,” Reynolds told reporters. “I didn’t castrate hogs, but I can skin a chicken and I can do that pretty well, so anyway — that’s part of growing up on a farm.”

Reynolds grew up near St. Charles, Iowa. Ernst, who grew up near Red Oak, has garnered all sorts of national attention her “make ’em squeal” campaign ad. Branstad called it a “gutsy” campaign move for Ernst to talk about castrating pigs.

“There’s nothing wrong with that,” Branstad said. “It is certainly not ‘mutilating animals’ as certain Democrats have said.”

Last week state Senator Steve Sodders, a Democrat from State Center, spoke at an Iowa Democratic Party news conference organized to criticize Ernst and he said: “Iowans aren’t for mutilating animals.” Branstad, by the way, told reporters that as he grew up on the farm, he held pigs while someone else did the cutting.