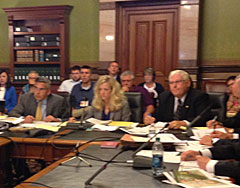 Greg Wright told members of the Iowa Senate Oversight Committee today that work began, without a signed contract, potentially exposing Iowa taxpayers to liability for the full bill on construction.

“I did ask the principal architect…about a contract and he said he was told by Department of Administrative Services that they didn’t need one at that time and that they’d work one out later,” Wright said.

Wright refused to sign the paperwork the state had to submit to qualify for the federal grant money.

“The feds rely upon the State of Iowa to make certain certifications that the particular state that’s submitting an application is following the proper protocol,” Wright said. “I went to my boss, the commandant, to tell him that I didn’t feel comfortable with this situation…We’re talking millions of dollars, potentially. Well, the commandant got furious with me because he wanted me to sign it and then he grabbed the document from me and used some special language which I won’t use here and said he would, that he didn’t have a problem, that Des Moines wanted this project to move forward and he signed it.”

Senator Matt McCoy, a Democrat from Des Moines, said the document seems to have been signed under “mysterious circumstances.”

“How could any of that pass the sniff test with the feds?” McCoy asked.

The former chief financial officer at the Veterans Home told lawmakers that he warned two auditors in the state auditor’s office they might find the contract for the construction work at the home had been back-dated.

“I identified that there was a design contract that they ought to look at and look at the deliverables and the date it was signed and I think once you look at those, it may not add up,” Wright said.

Wright, who is a certified public accountant, worked in the state auditor’s office for 12 years.

A spokesman for the Iowa Department of Administrative Services issued a written statement, saying no contracts were back-dated, however the firm Wright discussed with work “for a period of time” without a contract and no payment was made to the company “until a contract was signed.”

Wright was business manager of the Iowa Veterans Home from December of 1998 until July of 2012. He was one of several “merit” employees in state government who were dismissed and replaced with “at will” workers who can be hand-picked by state agency managers, without conducting a job search.

A spokesman for the state auditor said aside from an annual audit of the Iowa Veterans Home budget, he is not aware an any investigation of the construction at the Veterans Home.

(This posted was updated with additional information.)