You are here: Home / Agriculture / Futuristic gardening on display at ISU’s Reiman Gardens 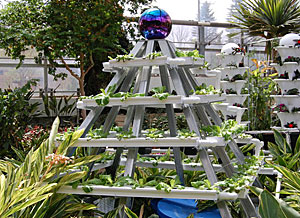 Lettuce growing the way it would for space colonists.

A new “bio-dome” display at Iowa State University offers a glimpse into the future of agriculture — in space.

The attraction at ISU’s Reiman Gardens depicts techniques astronauts could use on a long voyage to Mars, for example.

Allen Pattillo, a fisheries and aquaculture extension specialist, says the bio-dome helps visitors imagine challenges for space colonists, as well as future Earthlings who face limited supplies of water and other natural resources.

“What we’re trying to do is display some different sustainable closed-loop methods of agriculture, growing some different plants and also growing some fish,” Pattillo says. “We’re really trying to show a lot of different types of options for hydroponic plant production as well as fish and crayfish that you might be able to grow.”

You don’t have to be an astronaut to take advantage of the growing methods depicted in the exhibit. Pattillo says Iowans in tight quarters can quickly start a vertical garden. “You should be able to do this in a very small space,” Pattillo says. “What we have shown off in the exhibit is some vertical hydroponic production and some grow towers, also some trellises where you can grow up instead of out and be able to take advantage of the three dimensional space in there.”

The plants include lettuce, tomatoes, mustard greens, cucumbers and pole beans, while the fish are Nile tilapia and redclaw crayfish. The fish are being fed a protein supplement in a closed ecosystem where their waste circulates outside the tank and becomes food for the plants.

“After the water leaves that fish section, it goes into a biological filtration area where bacteria then processes that ammonia and nitrite over into nitrate, which is plant food,” Pattillo says. “The plants will filter that water, take those nutrients out of there, clean it up for the fish and it’s just returned right back to the fish.” The exhibit shows four types of “soil-less” plant systems, including floating rafts, Dutch pots and a plant pyramid.

The exhibit will be at ISU’s Reiman Gardens through mid-November.