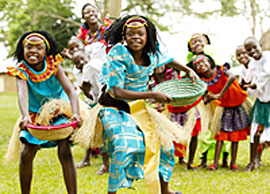 Members of the Wototo Children’s Choir

A 22-member children’s choir from the African nation of Uganda is making three stops in Iowa this week. Choir director Phillip Mugerwa says the singers in the choir range in age from seven to 12 years old and all have lost at least one parent.

He says one goal of this tour of America is to raise awareness about the plight of the orphaned and vulnerable children of Africa. “The music we do as the Wototo Children’s Choir is Christian music and it’s in the local language and in English as well,” Mugerwa says. “It’s just a celebration of what God has done for us and what God can do. We sing and dance with traditional dances.”

The performance is entitled Beautiful Africa: A New Generation. With vibrant, original music, dance routines and life-transforming stories, he says the tour is indicative of the new generation of leaders emerging out of that region of east-central Africa. “Wototo Child Care Ministry in Uganda cares for over 3,000 children who have lost either one or both of their parents to either HIV/AIDS or war or other situations,” Mugerwa says. “We rescue children and we raise them up to be future leaders because we believe these children will in turn be the leaders in Africa who will help rebuild the nation of Uganda.”

The choir’s Concert of Hope, he says, shares a message of transformation by telling the story of Africa’s rescued orphans. All performances are free and open to the public. The choir will be in Orange City on Wednesday, Le Mars on Thursday and Atlantic on Friday.