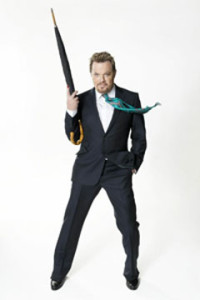 A British comedian who ranks among the 20 greatest stand-up acts of all time is making his first stop in Iowa next week. Eddie Izzard  is first and foremost on a mission to make people laugh, but he’s also very serious about making them think about world issues.

The 52-year-old Izzard says too few political leaders are thinking beyond their own borders, so he’s trying to bring his own brand of surreal, observational humor to as many people as possible — in their native languages.

“But if no one is thinking about how the whole world is going to knit together, we’re just going to blow ourselves up,” Izzard says. “In the spirit, of positivity, I thought I could do my gigs in French and then I’ll do them in German. Now, I’m touring in France in French and I’m touring in Germany in German. I’ve just started Spanish and then I’ll be able to tour Spain and all of South America and Central America and the Caribbean.”

He says he also wants to become fluent in Russian and Arabic. This tour is taking Izzard to 25 countries on five continents. He hasn’t set foot in Iowa before and he admits he doesn’t know much about the American Midwest, but his fans on Facebook are filling him in.

“I have this Historical Facts competition which goes out ahead of me,” Izzard says. “I’m asking people in the cities I’m playing to send in your historical facts so I can learn from people’s knowledge of weird and wonderful facts about places. I find that history is great. You can learn our future from studying our past, so that’s why I do it.”

In a 2005 poll to find the “Comedians’ Comedian,” Izzard was voted amongst the top 20 greatest comedy acts ever by fellow comedians and comedy insiders.

Izzard is doing one show in Iowa. He’ll appear next Monday at the Civic Center of Des Moines.