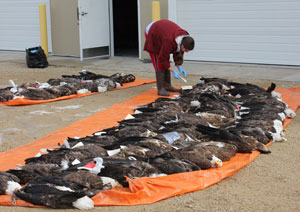 Officials in the Upper Mississippi River U.S. Fish and Wildlife Refuge are holding a series of meetings to discuss the links they’ve found between lead ammunition and dying bald eagles.

Ed Britton, the manager of the Savanna District of the refuge says they collected 168 dead eagles found in the refuge that stretches across Iowa, Illinois, Wisconsin and Minnesota.

Britton says they were surprised by the results after having the livers of the birds tested. “We were just doing a research study to find out if there was a relationship and 48-percent of the livers came back showing detectable lead concentrations. And 21-percent came back with lethal levels — meaning lead poisoning,” Britton says.

Researchers determined that eagles feed on piles of internal organs, known as gut piles, left behind by hunters preparing the deer in the field. They studied 25 such piles behind in a Savana area after a managed hunt and found lead fragments in all of the piles. “It ranged from one to 107 fragments per pile,” Britton says. “So, that’s a lot of lead particles in a gut pile.”

He says it does not take much lead to impact the eagles. “In smaller amounts there’s paralysis. often times there’s vision problems, stooping in the wings, they can’t fly and they die of starvation,” Britton says. “In the larger doses that we see, they die in a couple days and there’s almost no emaciation. Many of the eagles we looked at were in very good condition, but we found that their levels were very high.”

Eagles were on the endangered species list for 40 years before being removed in 2007 when their numbers rebounded. Britton says there were many conservation programs that brought the eagle population back to the 10,000 goal in the lower 48 states needed to take them off the list. “And the population is increasing — but we’re concerned when you have 21-percent of mortality related to lethal lead levels — of the long-term impacts to the population,” Britton says.

He says they are hoping to bring more awareness to the problem and get hunters to voluntarily switch to non-lead ammunition. Britton says they believe that spreading the information about the problem will make hunters take action. “We know that most hunters are conservationist, and we hope that through them learning about this story they will take the responsibility to switch to non-lead ammunition voluntarily,” Britton explains.

The first meeting was last night in Thomson, Illinois, just north of the Quad Cities. The other meetings will be held on Thursday (6/12) in Prairie du Chien, Wisconsin, then next week in Winona, Minnesota, and Onalaska, Wisconsin. Go to the Fish and Wildlife Service’s website to find out more.