You are here: Home / News / Vote to give Greene County a gambling license had drama 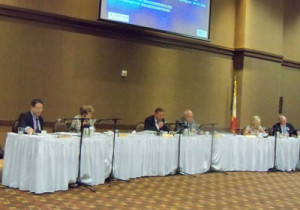 The Racing and Gaming Commission voted to approve a gambling license for Greene County at their meeting in Burlington.

There was some drama today in Burlington as the Racing and Gaming Commission voted 3-2 to award a new gambling license to Greene County.

The commissioners each stated their positions and how they would vote. It  stood  2-2 when it came to Jeff Lamberti, who is the commission chair, and by tradition the last to cast a vote.

Laberti said it was a very hard decision before finally telling the casino supporters, “I will be voting yes.” Cheers erupted from the Greene County supporters.

Lamberti said he had gone back and forth on the decision. “I do see an economic benefit of a casino in Greene County. I certainly see an impact on some other facilities that, by historical standards, are within parameters where a license has been granted in the past,” Lamberti said.

Lamberti also pointed out that he is from Polk County. “I guess that affects me in a couple of different ways in terms of making a decision. We have lots of advantages in Polk County and I think we have lots of advantages that are going to come in the future,” Lamberti explained. “We’ve got significant population growth amongst all of our suburbs. We’ve got some good things that are in the work that are pretty historic by Iowa standards. And quite frankly, we have advantages that a lot of other parts of the state don’t have, and quite frankly I think we are going to be just fine.”

The commission had voted 4-1 in April against awarding a new license for a proposed casino in Cedar Rapids, saying the new facility would cut too far into the profits of existing facilities and wasn’t best overall for the state.   That was again a factor for Commissioner Carl Heinrich of Council Bluffs who voted no. “Because of the size of the proposal which is not real population intensive, the fact it is diluting some of the existing casinos’’ financial status. Seeing no significant advantage either way for the state,” Heinrich said.

Delores Mertz of Algona voted yes, citing the impact the new casino would have on a smaller town. Mertz says rural Iowa is missing something and the casino can help fill that void. “Everything that we have goes to where the population is and that’s understandable. But you know, can’t rural Iowa sometimes have a little piece of the action. I think so,” Mertz said. Mertz was the only commissioner to vote for the Cedar Rapids casino.

Kristine Kramer of New Hampton said she weighed both sides of the issue and wasn’t convinced to vote for the Greene County proposal. “I got more of the impression that community needed a banquet room, meeting room, a new hotel. I felt that gaming was not the first priority. For the new non-profits it would be a positive impact, and for the existing non-profits, it would be a negative impact,” Kramer said.

Rich Arnold of Russell said it was a “very, very difficult decision,” but he believed the right decision was to approve the license. “I believe the positive factors of this application — specifically the significant impact to the region — outweighs the impact of one market at the projected levels. For this reason, I will be supporting granting a license and voting yes,” Russell said.

Wild Rose Entertainment expects to hold a groundbreaking for the new casino near Jefferson in the next 30 days, and hopes to begin construction on the $40 million project as soon as possible.