You are here: Home / Agriculture / Drought problems continue for parts of Iowa 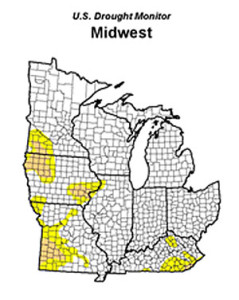 A new report from the National Drought Mitigation Center shows extremely dry conditions continue to plague many parts of the country, including two wide sections of Iowa.

Meteorologist Brad Rippey, at the U.S. Department of Agriculture, says some areas of the nation can’t get a break. “There’s 37% of the contiguous U.S. in drought but 27% in the three worst drought categories,” Rippey says. “That tells you there’s a very narrow sliver of buffer zone between no drought and some of these higher intensity drought categories.”

Many livestock operations rely on hay and Rippey says a large portion of the nation’s hay crop is again in jeopardy. “We still see almost one-third of the U.S. hay production area in drought,” he says. “Even a higher number if you look at the cattle inventory, U.S. cattle inventory 43% in drought.”

Rippey says those cattle numbers continue to decline and haven’t been at this level since the 1950s. The latest Iowa drought map shows about 40-percent of the state has some drought, which is down from almost 56-percent a week ago. In Iowa, the nation’s number-one corn producer, 29-percent of the corn crop is in moderate drought.

Two areas of the country are seeing the worst of the drought — one area is south of Iowa, the other is out west. “If you look at the map, there’s two very bright blotches of drought, one is centered on California and the Great Basin, the second on the southern Great Plains. In those areas, it’s intense drought,” Rippey says. “That really dominates the picture. These higher drought areas encompass most of the overall drought area.”

Forecasters say much of Iowa may see more rain this weekend, late Saturday and into Sunday, helping to boost lacking moisture levels.