You are here: Home / News / Hatch to reveal running mate “early next week” 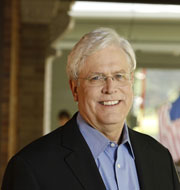 State Senator Jack Hatch, the Democratic Party’s nominee for governor, plans to reveal the name of his running mate in the next few days.

Hatch, who has lived in Des Moines his entire adult life, hints his running mate “most likely” will be from eastern Iowa. He says a “significant” number of the potential candidates on his list are women, although Hatch won’t guarantee that his running mate will be female.

“We want somebody who will be able to be governor if anything should happen to me,” Hatch says. “Also a person who will be a partner to me, that can act independently of me, that can go on appearances on their own and can really sell and reach out to the people of this state.”

Hatch’s choice for a running mate must be nominated and confirmed by delegates at the Iowa Democratic Party’s state convention on June 21. Once the June 3 primary was over, Governor Terry Branstad’s allies began airing ads attacking Hatch, suggesting Hatch released one year rather than five years of personal income tax returns because he has “something to hide” about his business dealings. Hatch says it’s attempt to divert attention away from Branstad’s record.

“We have a governor that is in the middle of a scandal-ridden adminsitration,” Hatch says.

Hatch points out Branstad didn’t release five years of tax returns in 2010 whe Branstad ended a 12-year absence from the political scene and ran for a fifth term as governor.

“We have followed the tradition of every governor and every candidate to release the tax returns of the year before the election,” Hatch says. “That’s what we’ve done.”

The Branstad campaign has ridiculed Hatch as a “struggling” candidate with a “broke campaign.” Hatch has not yet crossed the million-dollar fundraising goal he set for himself last year, while Branstad has been breaking fundraising records and started June with over four million dollars in his campaign account. Hatch says fundraising isn’t necessarily the best measure.

“We just saw in the election of this week that (US House Majority Leader) Eric Cantor lost, that he had a lot more money than his opponent,” Hatch says. “It’s a matter of whether or not we have vision and ideas, whether or not we can articulate our positions and make Iowans feel there is a better choice, a fresh start.”

Hatch made his comments during a half-hour-long interview that will air tonight at 7:30 on Iowa Public Television.