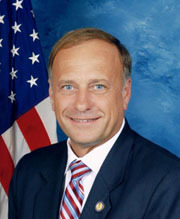 “What’s going on over there is a blitzkrieg tragedy compared to the loss in American blood and treasure that was invested in Iraq,” King says.

Insurgents have swept through Iraq and have surrounded the government in Baghdad.

“We’ve watched as this radical Islamist, militant, cruel group has advanced into Iraq, taken multiple cities…and has Baghdad half surrounded…and the president’s announcement is, ‘Well, we’re going to think about it for three or four days, but we’re not going to send troops in. I have several other options,'” King says. “It looks to me like the option that he has chosen Is the dither option.”

King says there’s no time to “fool around” and waiting may just give neighboring Iran time to move in to fill the void.

“The time to act is probably getting late now, but I don’t think it’s too late yet,” King says.

The insurgents in Iraq come from the civil war in Syria. They’ve declared themselves the “Islamic State of Iraq and Syria” and they have seized major cities in northern Iraq. Reports indicate “hundreds” of Iraqi government soldiers and residents in Mosul were decapitated. Their brutality has even led al-Qaeda’s leadership to denounce the insurgents.