You are here: Home / Business / Study details impact of casinos on businesses, crime and other issues 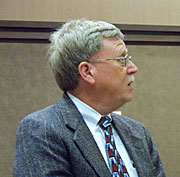 Mike Lipsman talks to the Iowa Racing and Gaming Commission.

The firms that conducted the socioeconomic study of gambling in Iowa presented a report to the Iowa Racing and Gaming Commission Thursday.

Mike Lipsman of the Strategic Economics Group says one important thing he found in the study was the impact on existing businesses in casino counties. He says he’d always heard in the past that money coming into the casinos was a “zero sum game,” that the money was being taken away from some other business. “I really did not find that to be the case,” Lipsman says.

He says the comparisons of county population, total non-farm personal income, wage and salary income, and employee benefits reveal that, on average, growth rates were slightly higher during the five years following the establishment of casinos than during the prior five years.

The study examined eight crimes and their frequency in the casino counties. Joseph Weinert of the Spectrum Gaming Group dealt with that part of the study and says the crime rates were up. “That is to be expected because they draw a lot of visitors from outside the county. So, the more people you have, the more crimes that are going to be committed,” Weinert explains. “However, when you look at the crime rates, they are not adjusted for those extra visitors.”

He says communities that have various types of entertainment often see increased crime as their populations increase. “What many states do is they adjust those figures to account for the influx of visitor population — whether its theme parks, special events, or in this case casinos. But that wasn’t done here and in this case the numbers are skewed high,” Weinert says.

Howard Kyle looked at the number of bankruptcies in counties with casinos. “What you found is that if you took the casino counties, they had a slightly higher bankruptcy rate than non-casino counties. But when you get into the issue of causation, you get into some issues of variability. There are a lot of factors that go into bankruptcy,” Kyle says. He says it’s hard to know how much the casinos impact bankruptcies without know the related impact of other issues. “Such as drug, alcohol, mental health problems. And also just the general state of the economy in terms of people having higher credit card debt, higher mortgage payments, unemployment medical costs, lack of medical insurance. Those factors have to be looked at also,” he says.

Kyle says the bankruptcy situation doesn’t raise any red flags. “On the whole, the state of Iowans is much better than their counterparts in the rest of the country,” Kyle says. “Iowa is 42nd in the number of bankruptcies. Where another state — Tennessee – is number one, which has no casinos at all.” The study is required by the state legislature and will be forward to them for review.

You can see the full study on the Iowa Racing and Gaming Commission’s website.