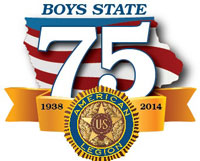 The Iowa chapter of the American Legion is celebrating 75 years of the Boys State program. Some 500 young men from across Iowa will attend this year’s Boys State event which teaches them about the democratic form of government, the organization of political parties and more.

This year’s director, Dennis Hanna of Gutttenberg, says a banquet later today will mark the anniversary and launch the week. “It’s the Freedom Dinner and we have quite a few plans,” Hanna says. “We have a couple of senators that are going to speak and one exciting senator is from Arizona and he was a Hawkeye Boys Stater.”

The Boys State camp officially opens Sunday and runs all next week at Camp Dodge, just north of Des Moines. Hanna describes some of what takes place. “We elect everybody from governor down to mayor and city council, treasurer of the cities,” he says. “In our particular Hawkeye State, we have this year 24 cities and 12 counties.”

Participants will also be able to sing in a Boys State choir or play in a band. There’s also a Boys State Law School with mock trials and a law exam.