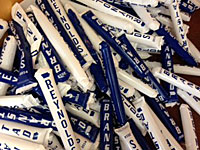 Noisemakers handed out by the Governor and Lt. Governor.

The Iowa Republican Party’s state convention featured a unity message from both the party’s chairman and the Republican governor who is seeking a sixth term in November.

Iowa GOP chairman Danny Carroll of Grinnell opened the convention by urging the party faithful to quit dividing themselves into factions.

“Instead of criticizing and finding fault, let’s remember what our mom taught us long ago: if you can’t say anything nice, then don’t say anything at all,” Carroll said.

An hour and a half later, Governor Terry Branstad promised to help Republican candidates “up and down the ticket.”

“Iowa can show the nation that a united Republican Party can lead America in the right direction for a bright future,” Branstad said, his voice rising as he yelled to conclude: “We can do it. We can do it together.”

“I’ve been through a few campaigns and I have a sense that this year, 2014, is a year we can win all of these races with your hard work and your help,” Branstad said.

If Branstad wins another term, in a couple of years he will become the longest-serving governor in U.S. history. Branstad delivered a 15 minute speech to the delegates and did not once mention his Democratic opponent, Jack Hatch. Branstad did blast Bruce Braley, the Democratic nominee for the U.S. Senate. Joni Ernst, the Republican who’s facing off against Braley, did, too.

“A liberal trial lawyer who attacks farmers and now that trial lawyer is running againt a farm girl from Iowa,” Ernst said.

Both Branstad and Ernst mentioned the video of Braley speaking to a Texas group, warning Senator Chuck Grassley – who doesn’t have a law degree — might become chair of the Senate Judiciary Committee if Braley loses.

“I don’t have a law degree,” Ernst said, laughing. “I think that’s a good thing.”

The convention delegates sat through 17 different speeches during the first five hours Saturday, then a debate about the party’s platform began shortly after three o’clock in the afternoon.

Delegates voted to add to their platform a statement opposing “recognition of sharia law, foreign law and international law” in the U.S.  It passed by a narrow, 404 to 401 vote, among the delegates.

Efforts to add statements to the platform about light bulbs, search warrants and jury nullification were defeated. Alan Ostergren, the Muscatine County Attorney, was among the delegates who argued for a streamlined party platform.

“Are we really going to put light bulbs in the same document we put the value of human life, the value of individual freedom, what we stand for with constitutional government?” Ostergren asked. “…Let’s have a platform that’s short, simple and says who we are.”

There was no effort among the delegates to change the platform’s call for amendments to the state and U.S. constitutions that would ban same-sex marriage.

The convention adjourned shortly before 5:15 p.m.

(This post was updated at 5:27 p.m. with additional information.)