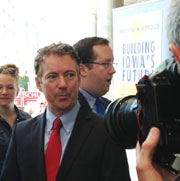 Each was given a speaking slot at the event. Kentucky Senator Rand Paul, the first of the trio to speak, urged Republicans to quit being the “tepid…Democrat Lite” party.

“If you want a Republican to be the next president of the United States, we are going to have to be a bigger, better, bolder party,” Paul said.

According to Paul, a Republican won’t win the White House in 2016 without a reboot of the party’s approach to voters.

“Frankly, the president won Iowa twice, so we can’t do the same-old, same-old,” Paul said. “…The real question we have as a party is we have to decide: Can we be true to our purpose, true to our core, true to our message and figure out how to reach out to people?”

Louisiana Governor Bobby Jindal told the crowd his “greatest fear” about President Obama’s legacy is that Obama is trying to “redefine the American Dream.”

“I would encourage and recommend to him that he sues Harvard Law School to get his tuition money back,” Jindal said. “I’m not sure what he learned while he wa there.”

Rick Santorum, the winner of the 2012 Iowa Caucuses, stressed the message in his new book, which argues the GOP must appeal to “blue collar” Americans.

“The people of America, the workers of America know that President Obama’s policies have let them down, they just have to know that we care,” Santorum said.

“Stop listening to the voices in the big cities who want to talk about capital gains and cuts for higher income individuals’ taxes and start talking about creating growth and opportunity for all working Americans, then we will be a majority party not just in Iowa, but all across this country for a long, long time to come,” Santorum said.

Barbara Hovland of Mason City, co-chair of the Cerro Gordo County Republican Party, was among those who talked with Paul before the convention started.

“He’s great. We need more people like Rand,” Hovland said. “…We have a government now that’s not working, that hasn’t been working. We have too much government. I just pray for him to keep going. I was behind people like Rand Paul and Ted Cruz to fight the good fight and do what we can.”

Hovland, however, hasn’t chosen a 2016 favorite yet. She’s already hosted an event with Cruz in Mason City and will host another with Rick Perry in Mason City next month.