You are here: Home / News / ‘Hollywood in the Heartland’ exhibit opens June 27

Early this morning Governor Terry Branstad toured the “Hollywood in the Heartland” exhibit that opens to the public at the State Historical Building on Friday, June 27. It showcases Iowans who’ve become movie stars and films that have been made in the state.

There’s a good bit of movie-related memoriabilia, too.”A ‘Teen Choice Award’ surfboard from Ashton Kutcher, who is from Homestead, Iowa — over near Iowa City; photographs and artifacts from Brandon 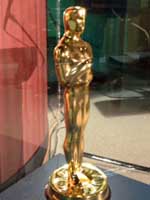 Routh from Norwalk who starred in ‘Superman’ and the Academy Award won by Chloris Leachman for Best Supporting Actress in The Last Picture Show,'” Branstad said.

“(Leachman is) moving houses right now. She’s building a new one and so she’s been living with her daughter and it was in a box, so first they had to go find the Oscar in her packing materials and then 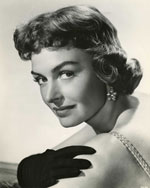 I drove to her daughter’s house, where she’s living, and got it from her assistant,” Gilman says. “And then I had it in my hands the whole time in the carry on and I was a little nervous in the TSA checkpoint, but it went right through and brought it straight directly here to the museum.”

During the exhibit’s opening weekend only, the Oscar Iowa native Donna Reed won in 1953 as Best Supporting Actress in “From Here to Eternity” will be on display. Iowa Department of Cultural Affairs Director Mary Cownie says exhibit-goers will find information about 18 Iowans who’ve become stars.

“We believe this new exhibit captures the contributions Iowans have made in bringing magic to Hollywood,” she says.

Ottumwa native Tom Arnold will be at the Historical Museum on Friday, June 27 for opening weekend festivities. Arnold starred in the 1994 blockbuster movie “True Lies” with Arnold Schwarzenegger and a script from the movie — autographed by Arnold, Schwarzenegger and James Cameron, the movie’s director — will be on display in the exhibit.