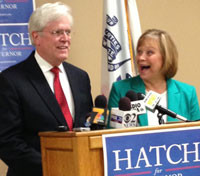 Democratic gubernatorial candidate Jack Hatch has chosen Cedar Rapids City Councilwoman Monica Vernon as his running mate. Hatch’s campaign revealed the choice on its website early this morning, before the news conference scheduled in Cedar Rapids to make the announcement.

“This was not a difficult decision,” Hatch told supporters gathered at a union hall for the 9 a.m. event. “…There is not a person that I’d rather have on my team running for lieutenant governor than Monica Vernon.”

Vernon’s become well-known outside of Cedar Rapids, in Iowa’s first congressional district. She finished second in the June 3 Primary contest for the Democratic Party’s nomination in the district.

“I’m here today because I think that Iowans are looking for a change at the top and, like me, they want a fresh start, ” Vernon said. “And that’s really why I’m so pleased, so honored and so excited to join the Jack Hatch for governor team.”

Vernon was elected to the city council in Cedar Rapids six months before the 2008 flood that devastated the city. She praised Hatch, who is a property developer, for being willing to build in the flood-ravaged “New Bohemia” neighborhood in Cedar Rapids. 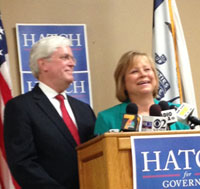 “When other people wouldn’t come to Cedar Rapids, when other developers were too worried about the risk — Would this work? Could they rebuild in the flood zone? — one guy came in and wasn’t afraid of it and that guy is Jack Hatch,” Vernon said.

Vernon, who is a life-long Iowan, was a registered Republican until 2009, but she says she has never voted for Republican Governor Terry Branstad in any of the five previous elections he’s been on the ballot.

“I voted for who I felt was the best person,” Vernon told reporters. “…What I look at is when you’re rebuilding a state and you’re taking a state to the next heights, like Jack talked about, I don’t think you stop and ask people, necessarily, what their party or their ideology is. You’re all about getting things done.”

Hatch has been positioning himself as both a state legislator and a businessman. Hatch now touts Vernon’s credentials as both a local elected official and as the owner of a business for the past 26 years.

“That kind of dual responsibility, that kind of commitment to her city and to her business really was pretty rmarkable,” Hatch said.

The Branstad campaign has already launched a separate website to attack the Hatch-Vernon ticket. The Branstad campaign ridiculed Hatch, who is from Des Moines, and Vernon as urban liberals. Vernon says she’s ready to debate Branstad’s running mate, Lieutenant Governor Kim Reynolds, but the Branstad campaign already said no last week when announcing it would participate in three debates with Hatch in August, September and October. Tommy Schultz, a spokesman for the Branstad campaign, said: “This is a campaign between Terry Branstad and Jack Hatch and that is whom voters expect to see in a debate.”