You are here: Home / Agriculture / Manchester farm among those hit hard by storm 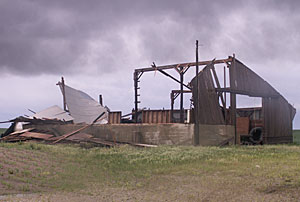 Building damaged on the Hahn farm near Manchester.

Ryan says at least one tornado touched down. “We did have a report from spotters — Winthrop fire in Buchanan County — and then that was confirmed by Dundee spotters, they were sure they saw something south of there,” Ryan says. He says they talked with the National Weather Service which confirmed they did see a radar signature that could have been a tornado in the area at the time.

Several farms along Highway 13 several miles north of Manchester had substantial damage, including the Kenny and Linda Hahn farm. “We lost a couple grain bins, we lost a machine shed up on the hill, damage to the hog buildings, most of the trees in the yard, a shed that had horses in it,” Linda Hahn says.

Hahn says they were home when the storm hit. “It was loud, it was short. It went really fast and we saw the trees fall in the front 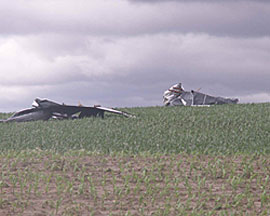 Grain bins blown into a field.

yard and with all the lightening we started seeing the damage — we waited a little bit then went out and checked it out,” Hahn says.

A hog building west of Highway 13 several miles north of Manchester lost part of its roof, with debris strewn across the field. And damage was reported to farms and homes south of Edgewood, as well as at Del-Clay Farm Equipment. One Manchester resident reported that she had six inches of hail that had built up on her porch in a drift.

The Fayette County Sheriff’s Office says they were hit with extensive storm damage, with the majority of it reported in Maynard, Randalia and Westgate.

A barn was reported blown down east of West Union on Highway 56 and several other barns were down in the Westgate area. And a tornado was indicated by weather radar near Masonville, but no word yet on official storm reports and damage from that area.