You are here: Home / Fires/Accidents/Disasters / Most of state saw severe weather 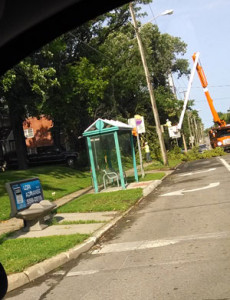 The National Weather Service is trying to assess the damage from severe weather overnight. Meteorologist Jeff Johnson coordinates weather warnings and says it was a busy night and early morning.

“The damage was pretty widespread, of course we didn’t have the high-end stuff they had over in Nebraska with the unfortunate loss of life over there, we had none of that in Iowa fortunately,” Johnson says. “But just looking at the map this morning, we had widespread wind and even a few tornado reports.”

The storms that did the deadly damage in Nebraska were the same ones that ended up in Iowa. “They formed over northeast Nebraska, southeast South Dakota, northwest Iowa, and then kind of merged into some sort of line and then it kinda just went right across northern Iowa and then east-central Iowa in the early morning hours,” Johnson says.

Storm spotters sometimes can confirm twisters, but Johnson says otherwise it’s like a jigsaw puzzle as they try to look at the damage and determine the type of storm.

“We did have confirmed tornadoes, and definitely one up in northwest Humboldt County. We had a visual confirmation with that and pictures,” Johnson says. He says that tornado 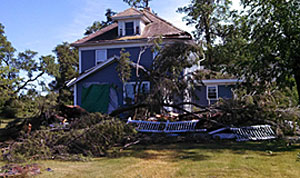 touched down in an open field and did not do any damage. Johnson says they are confident there were tornadoes near Mason City and the north-central part of the state. They have a survey team in Clarksville trying to sort out some of the damage.

. “We’re gonna have episodes of heat on the south side of this warm frontal boundary that is snaking its way across the state and upper midwest,” Johnson says. “And then usually in the late afternoon and overnight hours we’ll have thunderstorms develop near that boundary and kind of race off to the east. Just looking at tonight, much of Iowa is under the gun for another round of storms tonight.”

Johnson says this is typical June weather, although things have been quiet the last couple of years.
(Fayette County photos courtesy of the Sheriff’s Department) 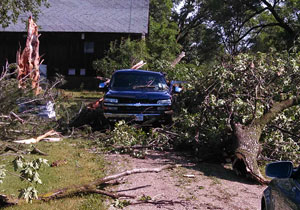 More tree damage at a home near Westgate in Fayette County.