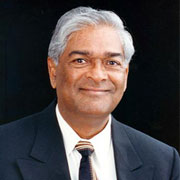 A man who worked closely with a Nobel Peace Prize winning plant scientist from Iowa has been selected to receive the 2014 World Food Prize. Sanjaya Rajaram succeeded Norman Borlaug as head of a wheat breeding program in Mexico.

World Food Prize President Kenneth Quinn says Rajaram led the program at CIMMYT for 25 years. “He developed 480 new wheat varieties that have been made available to farmers in 51 countries on six continents,” Quinn says. The selection of Rajaram as this year’s World Food Prize Laureate was revealed this morning at a ceremony in Washington, D.C.

The Iowa-based World Food Prize, established in 1986, was created in large part by Borlaug, as a way to honor those who make contributions to improve the quality and availability of food.

Quinn says more people are dependent on wheat for their basic food needs than any other crop. “But, until this year, the World Food Prize has never been given to anyone who has worked in that crop, despite the fact that it is the most important crop in terms of feeding people around the world,” Quinn said. According to Quinn, Borlaug himself called Rajaram “the greatest present-day wheat scientist in the world.” 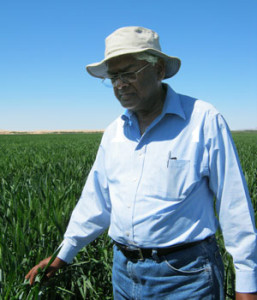 Borlaug, who died in 2010, was born 100 years ago (March 25, 1914) in Cresco, Iowa. “Having an individual like Dr. Rajaram, who was born in India and is a citizen of Mexico, honored this year is so appropriate because Dr. Borlaug’s original work was in Mexico and then he went to India as that country faced massive starvation,” Quinn said. Borlaug, awarded the Nobel Peace Prize in 1970, has been called “the father of the Green Revolution.”

He developed higher-yielding, drought-resistant varieties of wheat that are credited with saving billions of people from starvation. The 71-year-old Rajaram will receive the World Food Prize during a ceremony on October 17 at the Iowa State Capitol in Des Moines. “Dr. Rajaram has, himself, made an incredible contribution to global food security by making 200 million tons of wheat available to feed people and he represents and is the continuation of Dr. Borlaug’s legacy,” Quinn said.

A statement from Rajaram was included in a news release announcing his selection as the 2014 World Food Prize Laureate:

“I felt highly honored to receive the news that the 2014 World Food Prize would be awarded to me, and through me, to hundreds and thousands of wheat researchers and farmers around the world. I believe that the challenges of 21st-century agriculture and food production are surmountable compared to the past and can be overcome provided we can bring together new knowledge and delivery systems to farmers in a very sustainable manner. Future crop production is bound to decline unless we fully factor in the issues related to climate change, soil fertility and water deficits, and utilize advanced genetics in the next 20 to 30 years. It will require all the resources from international research centers, national governments, foundations, NGOs and farmer groups together to synergize future agricultural technologies and food production.”