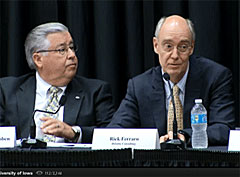 The University of Iowa hosted the second public forum Wednesday on the efficiency study of operations on the Iowa City campus and at the other two state schools in Cedar Falls and Ames. One of the first questions from the public was how this study and the study and plan recently approved to change the funding formulas for the schools are connected.

Regent Larry McKibben of Marshalltown, is the chair of the efficiency study committee. “I view this project that I have been involved with as completely different than the performance-based funding that goes back to how the universities function here,” McKibben says.

The funding plan approved by the Board of Regents reallocates much of the state funding based on the number of in-state students at each school. The U-I would see the biggest change in funding under that plan. McKibben says finding savings through the efficiency study could eventually help with the implementation of the funding plan.

“It’s my hope that this committee and the outcomes that the regents process sin this actually have a positive backfilling affect and an outcome that minimizes what might be a consider…negative affects at this university,” McKibben says. The Board of Regents has said that the savings found will stay at the schools where they were found.

Consultants from Deloitte conducted the first phase of the study and have talked about standardization and collaboration at the three schools to save money in several areas. A questioner asked if there would also be a consolidation of some services at the schools. Rick Ferraro of Deloitte says there’s been no specific discussion of consolidation, and says it is always a possibility. But, Ferraro says they are looking at this as an issue of horizontal thinking. He talked about purchasing as an example and says if the three schools are buying 20 different kinds of sponges, they can talk to each other and find out the best way to buy them.

Ferraro says the schools do have some discussions now when it is convenient to do. “But if there’s difficulty, that becomes a more complex and difficult discussion to have. And that also is where there is opportunity, so there may be more of those difficult discussions,” Ferraro says. “But deciding you are going to do something the same way across three universities has nothing necessarily to do with organizational structure — which is what consolidation would mean — we are going to put it all on one organization.”

He says they’ve found more discussion can have a big impact on purchasing. “Sometimes you find between universities they are buying the exact same sponge for two different prices, from the same vendor,” Ferraro says. Ferraro says having the horizontal discussions can narrow down the focus and benefit everyone. He says they schools can get together and go out negotiate one contract and get one price that is often significantly lower. “Because these three institutions spend so much money, there is a big opportunity to just refine this in the next increment of standardization and cooperation across the system,” Ferraro says. He says it involves system thinking, not institutional thinking.

Ferraro and the others at Deloitte pointed out that system thinking can be used while still understanding that three schools have some distinct differences that will sometimes come into play. Deloitte’s initial estimate says the three schools could save between 30 and 80 million dollars. The will be one more of theses forums at Iowa State University on June 24th.

You can see the complete summary of the phase one report on the board’s website at: www.regents.iowa.gov