You are here: Home / Fires/Accidents/Disasters / Sioux City prepares for flooding 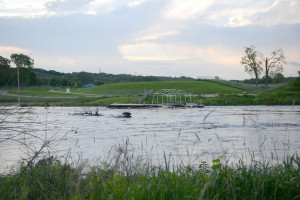 The Big Sioux River is expected to crest in Sioux City Friday.

Preparations are underway in Sioux City to try and limit the damage from the flooding on the Big Sioux River.

Public Works Director, Jade Dundas, says they are extending an earthen berm 561 feet in an effort to prevent flooding in the Riverside area of the city.

“The extension is going into place to protect the structures in Riverside,” Dundas says. He encourages residents with concerns over possible flooding of their basements to move items out of the basements. “The levee is there to protect these properties, we anticipate that it is going to hold and not cause a problem,” Dundas says.

The city has set up an area where residents can get sandbags. “We are asking that only Riverside residents at this time use this distribution center. We have a staff member there to help, but the materials are there for the citizens to make their own sandbags,” Dundas says.

City Manager Bob Padmore says they don’t have concerns about other streams flooding as they did in 2011. And he says the Big Sioux is expected to recede within 48 hours after it hits its crest on Friday.