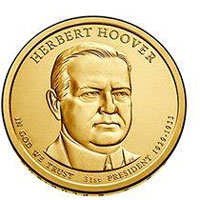 A ceremony was held at the Herbert Hoover Presidential Library and Museum in West Branch on Thursday to celebrate the new dollar coin that bears Hoover’s likeness.

The U.S. Mint releases four presidential coins each year and Tom Schwartz, the director of the Hoover Library, says 11 a.m. Thursday was the time Hoover’s was released to the public.

“Likenesses of earlier presidents aren’t as obvious or intuitive,” Schwartz says, “but fortunately they did a very good job of capturing Hoover’s image so when you look at it, you know it’s him.”

In 2007, the U.S. Mint began releasing the presidential dollar coins in the order the presidents served. By 2011, the Mint had a backlog of a billion presidential coins, so the number issued since 2012 has been reduced.

“These dollar coins now cost actually more than a dollar,” Schwartz says. “We were selling rolls of 25 for the price that the Mint issues them at, at $32.95.”

“However, because we’re a federal agency, they allowed us to obtain a supply in advance, but we had to hold the sale of it until the actual release time,” Schwartz says.

The library’s foundation bought 100 of the “Hoover” coins and gave them to children who attended yesterday’s ceremony. A limited amount was also available for sale at the library.

“I think our supply is nearly exhausted,” Schwartz says. “I haven’t yet checked with the Museum Store, but I know there was a big, long line.”

Herbert Hoover was born in West Branch in 1874. He was elected president in 1928 and lost his bid for a second term to Franklin D. Roosevelt in 1932. Hoover died in 1964 at the age of 90. The likeness of Hoover featured on the dollar coin is based on photographs taken while he was president, when Hoover was in his mid- to late-50s.