You are here: Home / Crime / Courts / Man charged in murder of mom and son in Glidden 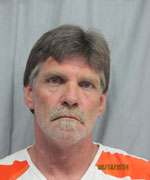 There’s now an arrest in a western Iowa double-murder case that had gone unsolved for a full month. Investigators with the DCI, the state patrol and the Carroll County Sheriff’s office searched the home of 53-year-old Thomas Henderson of Lake City on Thursday.

Based on the findings, Henderson was charged with two counts of murder in the deaths of 48-year-old Tammie Devore and her 30-year-old son, Karl. Their bodies were found in the elder Devore’s trailer in Glidden on May 18th.

Investigators aren’t commenting on the Henderson’s relationship with the victims.