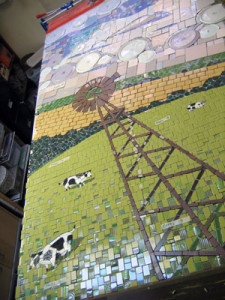 A large work of art is being assembled on a wall at the Fort Dodge Regional Airport that’ll be the first thing passengers see when they arrive at the terminal.

Airport director Rhonda Chambers says an artist from Minnesota who specializes in colorful mosaics was hired to create the work called “Over The Treetops,” especially for the Fort Dodge area. 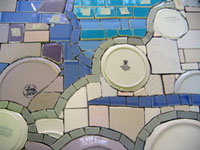 “The Des Moines River is in the background and it’s basically an 18-foot wide by 7-foot tall mosaic wall,” Chambers says, “and so it has thousands of little pieces of ceramics.”

It features rolling green hills populated by cows and above them, blue skies with puffy white clouds.

Chambers says the artist, Michael Sweere, has already used the style to create two such pieces now on display at the Minneapolis-Saint Paul airport.

“He uses broken pieces of ceramic plates and dishes and tile,” she says. “He uses all of these different colors to create that picture. ‘Over The Treetops’ incorporates this feeling of flight. It’s about taking off on a late summer day as you rise above the ground into the clouds and you see all the landscape.”

The project at the Fort Dodge airport terminal should be completed today.