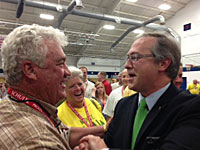 David Young talks with a supporter.

The suspense is over. Iowa Republicans have chosen a candidate in Iowa’s third congressional district.

Even the man who won the nomination admits he was stunned by the turn of events today.

“Anything can happen,” David Young told reporters this afternoon. “It’s exhilarating. There’s so many different emotions moving inside me, but right now I’m actually looking towards November and figuring out where we go from here.”

Over 500 delegates gathered in a high school gymnasium in Urbandale this morning for the special nominating convention and about five hours later Young had secured the spot on November’s ballot.

“Somebody asked me right before I got up on stage: “David, is this one of your magic tricks again?'” Young said, a reference to one of his campaign commercials. “I said: ‘No, but I have one trick left — and that’s to make Staci Appel disappear in November.'”

Appel is the Democratic Party’s nominee for seat now held by Republican Tom Latham, who is not seeking reelection. The third district delegates had to make the choice because none of the six candidates who ran in the GOP Primary secured 35 percent of the votes on June 3rd. 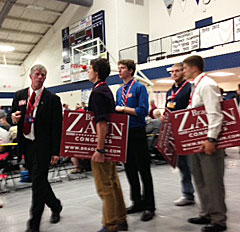 Brad Zaun arrives at the convention.

Brad Zaun, a state senator, finished first in the primary voting and Zaun repeatedly asked delegates to take that into consideration.

“I’m a little bit disappointed,” Zaun said after the loss, “but I’m going to be behind David Young 110 percent and I’ll do anything I can to help him.  “It took five rounds of voting, with all six primary candidates in the mix at the start, but it wound down to a contest between Zaun and Young, who had placed fifth in the primary.

In today’s last round of voting, a tie vote among the delegates from Polk County, Zaun’s home base, was likely the difference maker.

“But, hey listen: we move on,” Zaun said afterwards.

Two other key moments on Saturday helped Young surge past Zaun. One came when Matt Schultz, Iowa’s current secretary of state, was forced out of the competition by his last place finish in the third round of voting.

“I’m asking all of you who supported me to get behind David because we need someone who’s conservative and can win — and I trust David Young,” Schultz said, “so join me in trusting him.”

The other involved Robert Cramer, the construction company executive who finished second in the June 3rd Primary. Cramer took himself out of contention right before the third round of voting and Young spoke next.

“When I was 15, my parents moved the family from Van Meter to Johnston and across the street and two doors down was this tall, lanky blonde kid named Robert Cramer and he became my best friend,” Young said. “And we were in track together, basketball, choir, hung out at the swimming pool and we went to church together and he is a man of faith and he helped me grow in my faith and, Robert, I just want to thank you. I love you, brother.”

Many delegates stayed after the voting and the decision-making were over to congratulate Young.

“Talk about coming from behind,” one delegate told Young. “Congratulations. Well done.”

Young replied: “Anything can happen in politics. It’s a game that moves as you play.”

Young resigned from his job as Senator Chuck Grassley’s chief of staff over a year ago to run for the U.S. Senate after Democrat Tom Harkin announce he wouldn’t run for reelection, but Young switched his sights to the third congressional district after Republican Congressman Tom Latham announced this past December that he wouldn’t seek reelection in 2014.

Grassley issued a written statement late this afternoon saying Young “has the ability to appeal to a cross section of residents in the third district. Grassley also pledged to “do everything he can to help” Young get elected to congress.

AUDIO of Young speaking to delegates after he secured the nomination, 3:30