You are here: Home / News / Governor says lawmakers should decide if runoff needed in election system 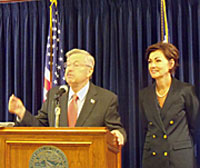 Governor Terry Branstad says he is still open to a possible change to have a runoff election when candidates don’t receive the required 35-percent of the vote needed in a primary. David Young was the fifth-place finisher in the primary for the nomination in the third congressional district, but won the nomination at this past weekend’s Republican convention.

Branstad says the outcome was due in part to the strong field. “You had six candidates — you had five of them that we’re all pretty strong — but he was wise in not alienating the supporters of others,” Branstad says. “When you have that many candidates, being the second choice turned out to be a pretty good situation.” He says Young’s strategy paid off. “I was impressed that while others attacked each other, David never did that. He stayed positive, and he had a very clear message,” Branstad says.

He says a lot of states have gone to a system where they have a runoff election in one week after if there is not a clear winner in the primary. “That’s something that might be we worth considering, but obviously it’s not relevant now because we have to live with the present law we have that I think worked effectively in this case. And I think the future general assembly can take a look at whether they think the system should change,” Branstad says.

The governor says Young is a good candidate who will represent Republicans well in November.