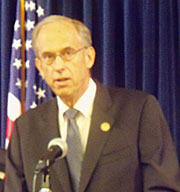 Iowa Homeland Security and Emergency Management Department (HSEMD) director, Mark Schouten, says the initial damage estimate for public infrastructure from flooding in northwest Iowa is 11 million dollars. Schouten says in addition to that, they are just finishing up the damage assessment from the June 3rd storms that hit the state and the damage estimate there is approaching $4.5 million.

Branstad says there is considerable hail damage in southwest Iowa in addition to the flood damage to crops in northwest Iowa. “You will have considerable crop damage separate and above form what we’ve talked about here today,” Branstad says.

Schouten says the flood concerns have moved to eastern Iowa where the waters have risen this weekend after heavy rains. He says we are supposed to have a dry period over the next two days — which should help. “We hope that will allow the water levels to drop without further damage,” Schouten says. “But in the meantime, most of the ground remains pretty water saturated. And as such, we are vulnerable to future flooding should additional rain occur.” 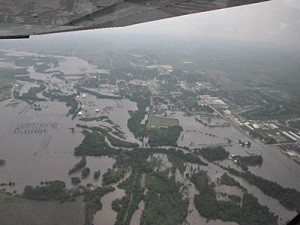 The Governor’s office released this aerial photo of the Rock Valley flooding.

Part of the assessment is to see if there is enough damage to qualify for a presidential disaster declaration to gain federal money to help with the repairs. Schouten believes there should be enough damage from the flooding to qualify. “We’re optimistic, yes, that once the assessment is completed, the damages unfortunately are sufficient. We certainly will be requesting the presidential declaration. That decision is ultimately made by the president,” Schouten explains.

Schouten toured northwest Iowa with the governor last week and says he is impressed with the way residents have responded. “We saw how despair brings out the goodness in Iowans. We saw neighbors helping neighbors, we saw as the governor mention, levees being constructed. in Rock Valley alone volunteers put together a levy system that was some 8,080 feet in length to protect the various parts of that city.